September Update or Where has the summer gone? 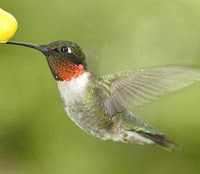 Summer came & went!!
The weather has been uncooperative off & on... what's new with that? The weather determines what project we work on at any given time.
We've enjoyed the humming birds... we had about 30 (give or take - it's hard to count because they move so darned fast)... but before we left we were down to three. We got SO much enjoyment out of watching them.
We got LOTS done this month... including getting most of the cabin sided with 1" x 12" spruce - stained cedar. We'vve not gotten the windows trimmed yet - but hope to have that done before winter!
We built base kitchen cabinets & decided to build a counter rather than use a "store-bought" one... using Mexican tile we purchased at a garage sale. Although we didn't have enough to do the whole counter top, backsplash & the front edge of the counter (and after a trip to Taos to look for something suitable) Jerry came up with the idea to build a wood frame around the counter & fill in with the tile. The backsplash is just tile set on the back edge of the frame. We used 1" x 4" to frame & used it on the front of the counter as well. I have to say... It looks REALLY nice!! I have enough tile left over to put about 2 square feet of it behind the kitchen stove -- figured it would be easier to clean grease spatter off tile than it would off aspen tongue & groove! We also built upper cabinets, faced the bottoms of them & the four visible ends with leftover aspen. We added 12 volt lighting under the upper cabinets as well!
We bought an RV size (25" x 18") kitchen sink on ebay rather than use the stainless steel sink we brought - it was just too big! I used the remaining big pieces of aspen T & G on the kitchen wall that is shared with what will be the pantry/coat closet. I was 4 pieces short of finishing! Rats! Jerry attached shelf brackets to the back of that wall (in the pantry) and cut up pieces of left over plywood for shelves.
We got ahead of ourselves when we did the counters (as long as we had mastic) and put down the tile on the floor of the hearth. We lived with it, looked at it, wondered how to do it... for a couple weeks... then a friend of ours told us he had a tile wet saw! SCORE one for us!! We finished the rest of the hearth (2 back walls) in an afternoon. We had left over pieces of tile (cut) and not enough of the 12" tile left to do any size entryway... so I broke those cut pieces with a hammer & will use those to make a mosaic with the left over 12" tiles as a "frame".
We also built a back door out of 1" x 8" spruce (exterior), 1 1/2" solid core foam insulation (center) 1" x 6" pine (interior)... and stained it cedar as well. Have to say the end result was quite nice! We bought quite a bit of the 1" x 8" spruce... so we used the remainder on the bathroom walls - completed one and most of a second. It looks very rustic... much like an old outhouse might!
We've been patiently waiting for stovepipe to be delivered so we can get our woodstove hooked up. As temperatures dropped (this past week we had lows in the mid to low-20's) we began to wonder if the last two pieces would ever arrive... and of course just before we got ready to come back to Nebraska for a week... they showed up! Guess what we'll be doing when we get back?!

Well... we're back in Nebraska for a few days. Friends got married last nite... having a garage sale Thursday/Friday/Saturday this coming week! Lots to do in a short amount of time as we have to get back to finish getting the cabin ready for winter.
Posted by Marcy at 3:22 PM No comments:

Pictures of the Cabin... and surrounding area

These are a few of my favorite things...